It’s something no one is usually willing to talk about, especially crowdfunding platforms. Still, the harsh reality is only a tiny percentage of campaigns ever manage to wrangle enough backers to get off the ground.

But this is why when one does, and more than that continues to thrive, it is worth talking about. Especially an Indiegogo-begun project that’s described by their developers as a “Free multiplayer 3D adult game.”

So let’s take a look at Yareel 3d: where it came from, what it is now, what plans it has for the future.

After their backing success, the group went on to expand Yareel 3d by making it available on a variety of platforms, eventually getting it where it is today with browser-based (PC or Apple) computer compatibility in addition to a version for Android smartphones.

Which works perfectly, as the major stumbling block in taking the former approach is having to avoid the uncanny valley, where a realistic character reaches a point where it looks less lifelike and more disturbing, you might say.

Plus, by reducing the game’s detail, Yareel 3d can run on less computing power. This is why Android owners can play it—and iPhone users probably could do so as well if Apple weren’t so puritanical when it comes to sex-related apps.

Play by yourself or with others in Yareel 3d

Yareel 3d is basically free, though following the lead set by other online games, if you want extra perks, you’ll have to purchase some of their unique, in-game currency.

Running on the Unity engine—a well-established platform for all kinds of games, and not just sexy ones—after launching the version of your choice, you begin by creating a character: a choice limited to male or female, followed by adding basic information like your orientation, etc.

Adhering to that age-old maxim of “you get what you pay for” without spending money, your options are limited, including how big you want to make your character’s “equipment,” the clothes they’ll be able to wear, and what sexual positions and activities you can put them into.

About that, if it’s your thing, you can take advantage of Yareel 3d’s extremely active community to play with another person or persons. A community that, as I write this, is over 300,000 strong.

Again, what you look like and the sexual stuff your avatar can do depends on how much you’re willing to spend—or not.

If you are in a social mood, you can use the game’s “Find Friends” feature that allows you to ask around for a willing partner. Or, if that doesn’t sound appealing, there’s the option to step into Yareel 3d’s virtual bar to chat, flirt, and get to know other users instead of immediately jumping into any bumping and grinding.

The developers recently added a new feature that they hope will prevent players from agreeing to play with someone else only to back out at the last minute, leaving everyone else hanging high and dry. I didn’t have that bad behavior happen to me while I was trying to hook up with someone, but from all accounts, this behavior has been a pretty big problem.

What your characters can sexually do is just a matter of selecting any of a series of pre-set position buttons located at the bottom of the screen. Though until you pay with in-game currency, you’re going to be stuck with the basics.

What’s worse is that adding diversity to Yareel 3d wouldn’t be all that hard. After all, we’re not talking about an entire redo of the game, just a better range of options so more people could have fun playing it.

Aside from requiring in-game currency to unlock its more pleasurable features, which is a far from rare game mechanic these days, this lack of gender and sexual diversity is what I consider to be the game’s most significant drawback.

I just hope the development team realizes this and makes the upcoming Yareel 2.0 a game that everyone will be able to see themselves and their desires reflected in.

As I mentioned, what sets Yareel 3d apart from other sexy games is its ability to be practically played on anything, as in browser-based on a PC or Apple computer, as an app on Android, or a downloaded program for PC or Apple.

During my time with it, I chose the browser version (on my MacBook Air) since I’m always somewhat nervous about installing software on the machine I use to make a living.

Admitting that the downloaded version no doubt performs better, as the online option depends mainly on your connection speed, it didn’t run as well as I’d hoped it would, including a sizable and frustrating delay between selecting an action and it happening in the game.

To provide context, despite my computer’s now five years old, it’s never shown any signs of notably slowing down. Yareel 3d, however, ran so sluggishly that when I finally managed to find someone to get busy with, the fun was all but entirely drained out of the experience due to performance issues.

Still, I persisted and tried fiddling around with my machine’s various settings. But despite spending far too long turning on and off extensions, testing the game on Safari instead of Chrome, and rebooting my computer more than a few times, the best I was able to achieve was getting Yareel 3d to perform poorly—though a bit less so than before.

When it comes to in-game currency, users can buy set amounts of Yareel 3d tokens. Or they can also become a Patron receive tokens in addition to perks like exclusive clothing, unique sexual positions, and more.

This option also further demonstrates the development team’s commitment to their project and how loyal and passionate Yareel 3d’s fanbase is, as the game has managed to go from a crowdfunding success story to an ongoing, customer-supported enterprise utilizing Patreon to fund and therefore and improve itself.

I said somewhat, as in my final verdict, I’ll get to why, for me, Yareel 3d comes off as a fundamentally flawed game. 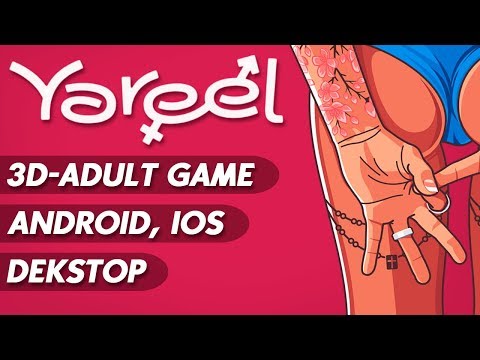 Though, as you’ve no doubt deduced from my comments, I feel there’s a long way to go before it gets there.

Just to be clear, I’m not saying this to dish the development team as it’s obvious they’re committed to what they’re doing—and precisely because of this passion and drive that I sincerely think Yareel 3d will eventually achieve legendary status.

Though it’s going to take quite a bit of work in the meantime, and perhaps some overall rethinking of Yareel 3d is and what it could be.

Starting by opening up the gaming experience in regards to gender expression, sexual orientation, and kink. Agreed, my perspective on Yareel 3d might be a tad skewed as diversity and inclusivity are a few of my hot button issues when looking at anything coming from the adult entertainment industry.

Even so, I’m far from alone in thinking this way, which is why I think Yareel 3d’s devs should try to move in this direction. Besides, not only could the game appeal to a broader audience, one that could also bring the game even more financial support, it’d also allow Yareel 3d’s current community to try out new ways to get busy.

Despite its current faults, I do think the current state of Yareel 3d is worth your time as it’s a delightfully steamy experience chocked full of things to do and courtesy of a vibrant community of fellow players to do them with.

And because it’s the very definition of a passion project: something that always worth our support and encouragement.