But what happens when this relatively new medium meets an adult entertainment giant like Naughty America? The answer is Naughty America VR: a site dedicated to immersive explicit videos—with the question then being, is it honestly worth paying for?

As with any adult site, what makes or breaks it typically hinges on what it offers. Though when you add virtual reality, that’s complicated by what platforms it supports.

In the case of Naughty America VR, let’s first look at it regarding its explicit stuff—and then from there, what it will take to enjoy it properly in VR.

Still, you have to give Naughty America VR the benefit of the doubt as virtual reality remains an expensive medium to work in: requiring pricy equipment, complicated editing techniques, and many other elements that can easily push it well beyond the reach of your average, or amateur, production.

What Naughty America VR does and doesn’t offer

However, other sites—like the aforementioned PornHub—have managed to provide far more content. Not only that, but they also offer a greater range of activities and the type of people in them.

The same is true for performers that are anything other than your typical, run-of-the-mill, porn-star Caucasianness as Naughty VR lists a scant five videos under their Ebony category.

(Shakes head in disappointment) I mean, seriously, in this day and age, and considering Naughty America VR’s been around for a while, to have this lack of diversity is just plain silly. Not to mention shortsighted, going back to my comment that adult sites commonly succeed or fail based on their content—or lack thereof.

Find what you want on Naughty America VR

And all of these dominant or domination videos are way too softcore to be anything any self-respecting died-in-the-wool kinkster would enjoy.

How Naughty America VR lists its content is also somewhat unusual, to put it mildly as their main landing page breaks everything down into three, and only three, ways: categories, that covers everything with no discernable rhyme or reason, jumping from sexual position to activity to specific body parts; who, that seems to be about the performers’ roles, including yawn-inducing cliches such as Married Woman, Bride, and Teacher; then finally there’s Where, which is oddly about location, location, location and nothing else.

Naughty America VR has its own stable of actresses on a dedicated part of the site, making looking for their content much easier if you’re a fan. There, clicking on one of their pictures will give you a breakdown of their essential stats in addition to what videos they perform in.

What’s really different are those stats, as I don’t think I’ve ever seen an adult site that offers this much detail. This is also more than a little odd and even frustrating as none of these stats, which include things like their measurements, aren’t hyperlinked. So if you, for example, are into performers with medium asses, you can’t click on the word to see if any other actress has that specific anatomical feature.

Adding more confusion, while they have this dedicated VR site, their main one has a whole section dedicated to Virtual Reality: begging the question of why two different sites and not a single one focused exclusively on immersive content?

Now we get to that other important consideration, one unique to virtual reality adult sites: what hardware is needed to enjoy all its sexy stuff.

Here, Naughty America VR does an okay, though barely that, job by supporting practically every VR rig on the market, ranging from the ultra-high-end ones, like the Oculus Rift and HTC Vive, to medium ones such as Playstation VR. And if you can’t manage to pay several hundreds of dollars for high-end hardware, you can watch their videos on a smartphone as well.

If you have the appropriate hardware and are a paying member of the site, to get to the fun, you first have to download the video—even if all you have is an Android or iPhone.

This can be a considerable pain in the ass as VR files can be huge, so it can take both a long time to download, especially over slow Wi-Fi, in addition to the file taking up a considerable amount of hard drive space. A noticeably confusing decision on their part, as more than a few virtual reality sites, allow you to stream content directly and so avoid these issues.

If you do choose to download, it’s a somewhat straightforward procedure requiring a few clicks to get the process started. Faster, of course, if you’re using VR hardware or your home computer and not a smartphone.

After that, it’s all about getting the content to play on your chosen hardware. Like with any VR content, adult stuff or otherwise, this may or may not be a simple process and may require strategic bangs of your head against a nearby table until you eventually suss out how to make everything run smoothly.

Naughty America VR does provide a brief support page, with a much more comprehensive one a simple click away that’s apparently operated by a third party.

What else to keep in mind when considering Naughty America VR

Then there’s the problem of interactivity or lack thereof as I couldn’t find anything on the Naughty America VR site about using it in conjunction with a smart sextoy.

Next, there’s the issue that—yet again something their competitors have no problem doing but some bizarre reason Naughty America VR decided not to—they don’t provide previews of what’s going to happen in any of their content.

Worst, it’s freaking annoying as Naughty America VR makes it look like there’s a preview, only to pull a bait and switch in that what looks like a video play button in reality redirects you instead to their sign-up page. 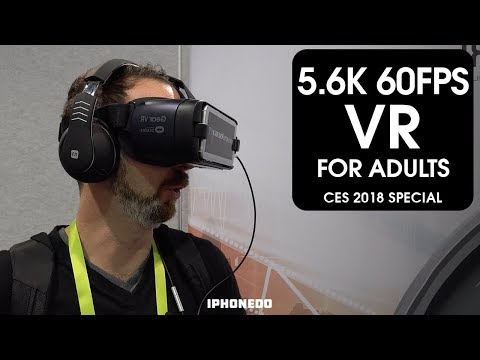 Here there are two pieces of good news: the first that if you’re a paying member of Naughty America then this VR content is yours for the watching.

The second is their three-day sample rate is remarkably cheap, so you don’t have to pay for a month or more to sample the site’s explicit wares.

For the latter, I recommend using that three-day rate to at least try Naughty America VR. Keeping in mind to make sure your payment doesn’t automatically continue afterward. Not saying that Naughty America will do that, but it’s always worth paying attention to.

Though if glancing at the site does get your virtual motor running, then by all means give it a whirl.

While this positive-esque final word on Naughty America VR might sound at first like I’m edging towards hypocrisy, please don’t think that I’m retreating from my criticisms.

So while I have concerns about where Naughty America VR is right now, that doesn’t mean that it’s a lost cause or not worth you joining up if the present site appeals to you.

Besides, who knows what an innovative company like Naughty America will come up with next? In a month or a year, or whatever time it takes, my problems with the site could be ancient history.

So check out Naughty America VR for all the sexy goodness it has right now—and to see where it could go in the future.