They twist and/or turn, vibrate or oscillate, come-hither or go-anywhere, cool down or heat up, stroke or pulse, strobe or glow-in-the-dark, realistic or surrealistic, OMG or teeny tiny, portable or heavy-duty industrial, smart as all get-out or dumb as a bag of hammers, space or stone age, and ones that’ll make you pancakes in the morning or tuck you in at night. 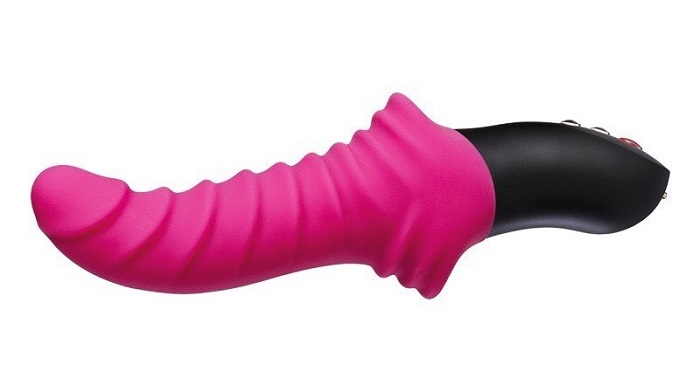 It even manages to be a fantastic implement for hitting those two sweet, sweet spots: the G one for those with vaginas and the P (as in prostate) for penis-equipped persons.

The Fun Factory Stronic Drei Vibrator’s impressiveness doesn’t end there, as it’s exceptionally well made. So can easily handle about each and every sexual activity you could ever use it with and “keep on ticking.” To use a very outdated term for ultra-fine engineering.

And the fun keeps on coming, and so will you, as it’s waterproof, for soaps and sudsy fun in the bath or shower, and comes with a built-in travel lock so it won’t accidentally start doing its Powerful Trusting Action … Action … Action when you’re standing in line at the airport.

Maybe not a “feature,” per se, but we also want to tip our bonnets to the folx at Fun Factory, who thoughtfully added to the Stronic Drei Vibrator‘s product page that it’s a very not good idea to use it if you or the whoever you’re playing with has a pacemaker. 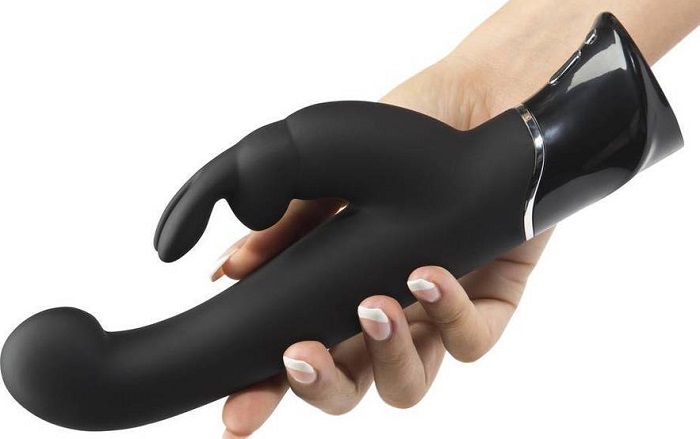 If you’re equipped with a vagina and get off on penetrative sex and like your clit tickled, then we have good news for you, as this is a fine-equality toy built for you and your sexual arousal in mind.

Plus, each of those motors comes with three intensity settings and nine unique vibrational patterns, making a total of 36 different combinations. So we doubt you’ll get bored with it anytime soon.

It’s also ideal if you’re worried about excess noise, as it’s a hushably quiet plaything, and if you like to get more than a little wet, it’s completely waterproof. Just don’t take it to the beach or into a hot tub, as that can seriously wreck it or any other silicone sextoy.

If we had to say anything bad about the Greedy Girl Thrusting Rabbit Vibe is that the name could do with a wee amount of shortening, and it’s part of the author-approved, Fifty Shades Of Grey toy line—a book both kinksters and sexologists aren’t exactly fond of.

Still, we have to give it to JOUJOU for bringing us such an exciting new sextoy, and one we feel will do the same for you.

What’s needed is a system to, for lack of a better word, help anchor the toy in place.

But there are other good points to this sextoy, including coming with its own wireless remote, how it lives up to its “realistic” product description, and the suction cup stand can tilt for optimal penetrative angling. 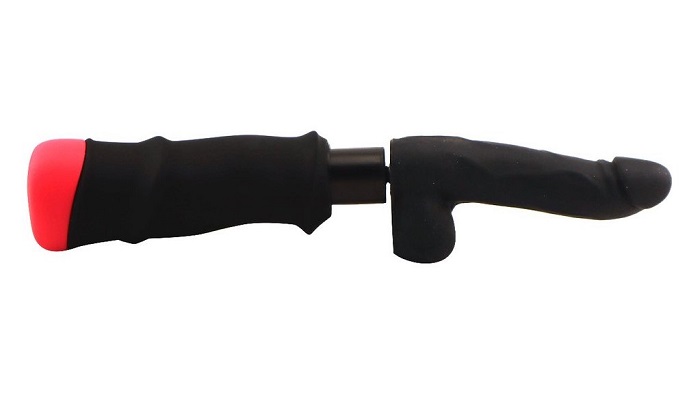 You want to feel, and we mean feel those thrusts? Craving seriously intense horsepower between your legs? Desiring as-good-as-real-sex pounding—or, if you play your cards right, with the possibility of even more intensity?

Then say howdy to a sextoy that says all that right on its tin, a toy that’s all about providing those mouth-watering, thigh-quivering, orgasm-churning thrusts.

And we’re not kidding, as you definitely have to like that kind of action since the Ultra-Thrusting Mega-Pounder isn’t what we’d call a gentle, sensual plaything—and, seriously, with a name like that, how could it be?

Noticeably backed up by how the Ultra-Thrusting Mega-Pounder gets its all-important power, i.e., you have to plug it in. Yep, you heard us right, this isn’t a charge-up-and-take-it-with-you type of sextoy but rather is a plug-in-and-hang-on one.

That’s good and somewhat bad news; the first is that it’s able to take full advantage of full, direct wall current to deliver all its oh-so-serious strokes; the second is that you should employ an extension cord when using it.

For clitoral pleasuring, you’ve got an independently powered stimulator; for vaginal stimulation, the motor there can make it twirl or vibrate, and what we’re all here for, it can also thrust forwards and backward half an inch.

It’s rare to find someone who only likes toys that do the whole in-and-out action and only that. So they frequently have to give up pleasuring these different parts of themselves or find a toy that’ll dish out those thrusts as well as stimulate their clits.

It has other things in its favor as well, like being waterproof, made by a highly respected company, has a satisfying range of built-in intensities and pre-set patterns, and is covered in non-reactive silicone. 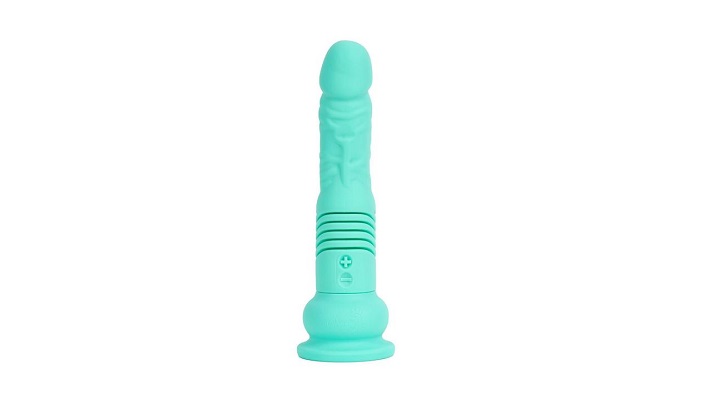 Enter the Velvet Mini Teddy: a sextoy bucking this rule by fitting into any, albeit somewhat large, shoulder bag but thrusts an impressive two inches.

Though that may not sound like much, we suggest you check any of the videos out there about it so you’ll have a better idea of how long, hard, and satisfying two inches can be.

The company behind the Velvet Mini Teddy has even managed to equip it with a suction cup base, so it won’t go wandering off while you’re enjoying those deliciously lengthy strokes. Lengthy and fast, as it can additionally rev up to a staggering 125 strokes per minute. 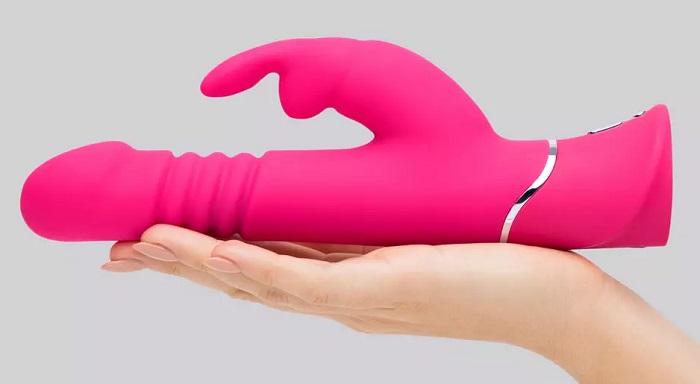 And it does all this to the tune of twelve different built-in vibration modes for its rabbit ears and three for its shaft. The fun keeps on coming since it’s also quiet, waterproof, and is made of body-safe, high-quality silicone. 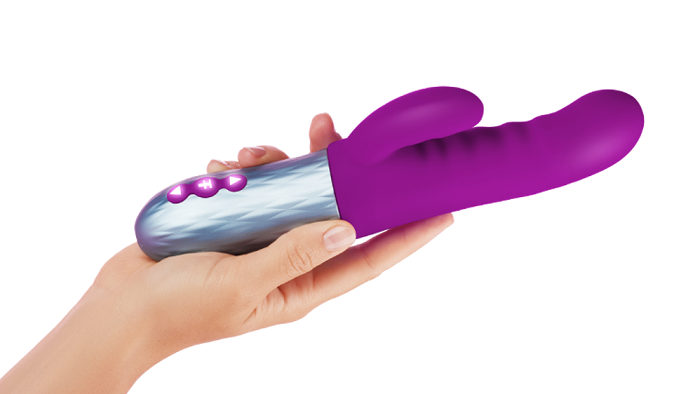 Fortunately for thrusting fans everywhere, the Essenza feels as good as it looks with its clitoral stimulating in addition to penetrative abilities, range of built-in vibrations, multiple colors available, and seven different thrusting speeds.

In addition to being handy-dandy and oh-so portably compact, ergonomically pleasant to use, it is built with a standby mode, so when not in use, it’ll retain a charge; it’s available in pink or purple—adding to its fashionista-accessory demeanor. 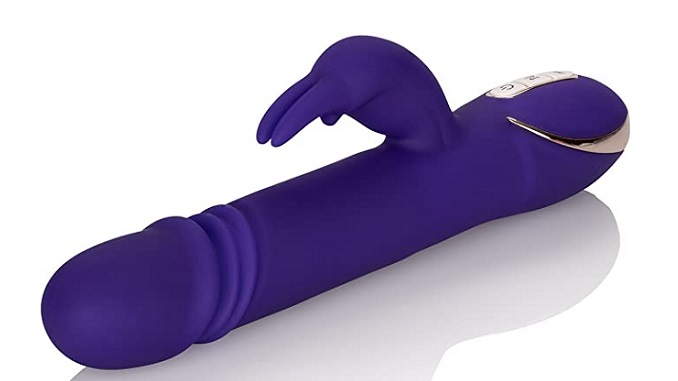 Yes, you heard us right the first time: dual, the first, as it’s another sextoy with two bunnies in its name, and the second dual because it joins the Happy Rabbit in being built to arouse the interior and exterior of vagina-equipped persons.

And it does this very, very well, primarily due to pair of clitoral and vaginal motors, a satisfying number of pre-set vibration modes, and three thrusting ones. Not to mention it’s waterproof for bath or showtime adventures, has non-reactive silicone skin, and its maker, CalExotics, is no stranger to making pleasure devices.

Since we’re near the end of our list, it’s probably worth talking about why it’s down here. Not to burst your bubble, the Jack Rabbit Signature Silicone Thrusting Rabbit is far more fun than many of the sex toys we’ve tried over the years. It’s that what it does and how it does it is good, maybe even great, just not superlative.

Unlike other sex-tech enterprises, Velvet is focused primarily on developing and selling thrusting devices, with the Jackie one of five differently-colored models.

The reason we don’t have Velvet and their line of toys higher up on our list is despite coming from a company every thrusting sextoy manufacturer should look up to, it’s still a single-purpose sextoy: great if that’s all you want, but for anyone looking for a more rounded experience, it may not be completely satisfying.

Like what you enjoy noshing on, no two people have the exact same preferences when it comes to sexual arousal. Sure, they probably have a great deal in common, but we’re absolutely unique when it comes to specifics.

But if multiple pleasures are your ticket, you may tend towards our second-place winner, Thrusting Rabbit Vibe from Greedy Girl, for its hitting-all-the-right-places excellent design and engineering.

Whatever direction you take, and where you choose to do your exploration into thrusting sex toys, please follow your passions and while listening to people who know their sex tech stuff, like us here at Teledildonics, can be informative always choose what you think will please you the most.

You’d think putting together the Best Thrusting Dildoes would be a walk in the park compared with other makes and models of sex toys; there aren’t many of them out there right now.

Imagine our surprise when the real challenge was deciding who should go where, as unlike other lists we’ve done, each entry in its own right deserves to be at the top.

Besides, it is a poster-child for a complete and total sensual/sexual experience, usable as it is for anus or vaginal play and designed to reach either a G-spot, for those with them, or a prostate, for anyone with one of those.

It does all this while looking remarkably cool and exciting. It’s like Fun Factory threw out the tried and true, and now exceedingly stale, sex-tech design book and gave us a glimpse of the future.

As we mentioned about choosing your own, though might gush over the Stronic Drei, but don’t let us talk you into something you don’t want. It’s your body, after all, and what excites you is no one’s business but your own—and if you’re playing with anyone else, if they’re a consenting adult.

Have fun, be safe, and have a life full of joyful discoveries and more anything else: pleasure!

The 8 Best Interactive Sex Toys For Adult Games And Movies