Considering the number of new products on the market advertising themselves as sextoys, with a markedly focus on the sex part of that word, as in they’re all about getting people off, it’s a breath of fresh air to see something where the manufacturer’s emphasis is more on the sensual side of things.

Not that We-Vibe’s touting their new Touch X massager as everything except a sexually stimulating device, but their marketing at least isn’t shouting orgasm, orgasm, orgasm as loud as other products are.

The question is then if this brand new toy from the great minds of We-Vibe can do the near-impossible of delivering a combination of sensual, massaging vibrations in addition to giving those more directly-sexual vibrators a run for their money?

Touch X: sensual and sexual in a single, well-made package 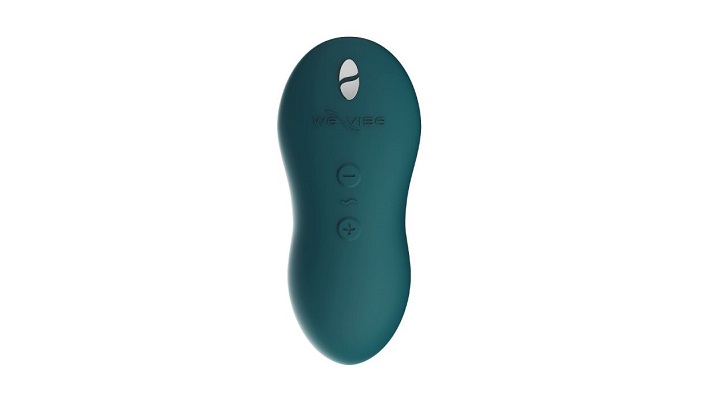 My subhead above gave it away, didn’t it? But this really is the case with the Touch X, as We-Vibe’s somehow created a pleasure device that’s both sensual and sexual without falling victim to a being “jack of all trades, master of one.”

The same, too, if you’re craving a heavy-duty, muscle-pounding massager, and while the Touch X can effectively unknot sizable tension knots, if yours are on the Gordian side, it won’t give as much relief as you probably need.

But if you’re between these two extremes, then the Touch X could very well be worth consideration.

And its good points don’t stop as vibrating and massaging, as We-Vibe’s given their new product some extra-added extras that also make it a step up from both a sensual and sexual pleasure.

Starting with how We-Vibe’s equipped the Touch X with a potent motor for its size: more than enough for most people to be able to enjoy, and then some, it’s seven unique vibration modes and eight levels of intensity.

It would be easy, but not accurate, to describe the Touch X as a kind of kissing-kin to bullet-type vibrators like We-Vibe’s own Tango X. Still, though those teeny-tiny vibrators can be fun on their own, they come with an inherent problem: that they can sometimes be tough to hang onto, extra when the person using them is turned on. 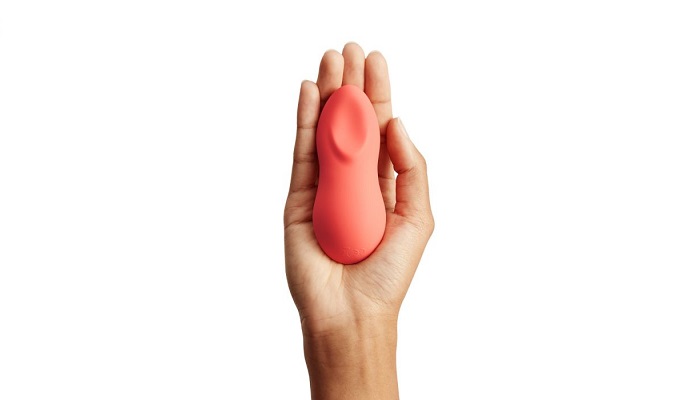 However, the Touch X has a bullet’s benefit of being portable, surreptitious (if that’s what you’re looking for), yet is far easier to hold and, therefore, control.

The Touch X’s shape has a lot to do with this, as with it, We-Vibe’s ditched the more-standard cylindrical shape a lot of vibrators seem to be stuck with in favor of a more flattened oval that adds to the Touch X’s ergonomic comfort when using it to untie a cramp or tickle whatever sexual fancy you desire.

By this, I mean that it somehow manages to look almost like a well-designed piece of artwork rather than a pleasure-inducing device.

Aided a great deal by We-Vibe’s resistance to falling back on yet another sextech cliche, that it doesn’t come that too-frequently disturbing shade of pink their competition so loves to use.

Instead, the Touch X is available in the two distinctly not-pink colors of Cave Coral and Green Velvet.

Further reinforcing my comment on it as lovely to look at and use, the Touch X is constructed of ABS body-safe silicone, without any hint of phthalates, latex, or BPAs, so no worries using one might cause an unpleasant physiological reaction.

Though it’s a good idea, notably if it’s your first time with one made of this kind of silicone, to slowly and carefully test drive it with a sharp eye out for how your body and skin, inside and out, feel during and afterward.

The Touch X’s general specifications—and how to use it 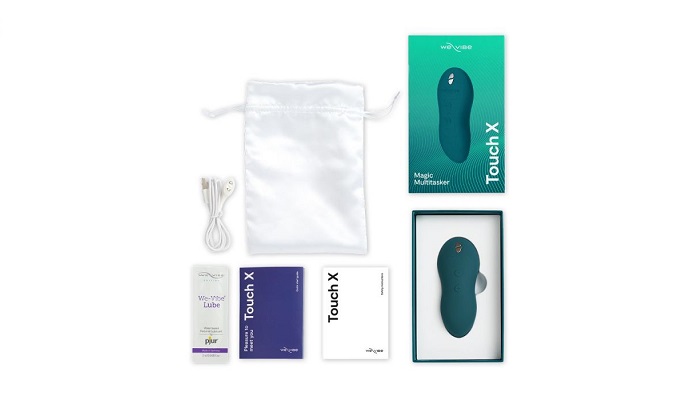 Just shy of four inches long, an inch and a half wide, and slightly over an inch thick, the Touch X fits in about the smallest of pocket or teeniest of pouch or bag without any difficulties.

As with the Tango X, that other new toy from We-Vibe, the Touch X has three exterior controls:

Pressing the first and last buttons simultaneously will also engage the Touch X’s travel lock, keeping it from accidentally firing up when you don’t want it to.

It’s may not be worth mentioning up, as it’s pretty evident from me talking the Touch X’s three-button control scheme, that this isn’t one of those hifalutin new breeds of ultra-intelligent sextoys: so no Bluetooth connectivity, no adult entertainment interactivity, no long-distance/teledildonics play sessions, and no vibration customization.

And that’s fine; as I’ve said before, smart sextoys can be a blast that doesn’t necessarily mean that every toy on the market should be able to do those kinds of futuristic tricks.

If anything, it’s good that the Touch X isn’t smart as if it was; it’d probably be tough to enjoy, particularly if we also had to fumble with our smartphone while trying to use it. 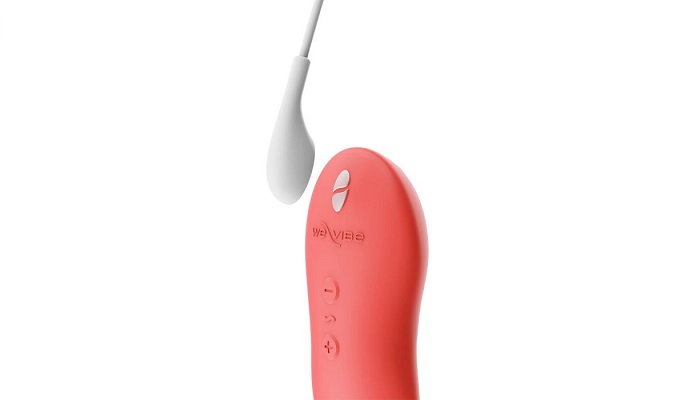 Following in the footsteps of similar We-Vibe toys, the Touch X is equipped with a pair of metal charging contacts to support its magnetic charging system. That, in my humble opinion, finally does what it’s supposed to go for once, though users will still need to make sure when the toy is charging and not accidentally knock the cable loose.

In the charging versus playtime category, the Touch X is excellent as it needs only 90 minutes to fill its built-in lithium-ion battery, which then can be put to work for two hours.

What comes with the Touch X

Staying true to their tradition of providing their customers the most for their bucks, We-Vibe packages the Touch X with a better-than-average collection of extras.

Leading with their two years warranty, which is double what many of their competitors currently offer. Next up is the product manual (also found on the We-Vibe site) and a Quick Start Guide.

And in addition to the charging cable, the Touch X comes with a well-made little pouch to keep it in and a sample packet of lube.

As with other silicone-covered sextoys, cleaning We-Vibe’s new product is far from difficult, as a measly drop or two of dish soap typically does the trick, mixed with warm and never too-hot water and dried with a lint-free cloth afterward.

Better yet, pick up one of We-Vibe’s recommended cleaning kits as though the old soap and water routine will be fine; it’s always recommended to use their own recommended products to do the job.

And just as you shouldn’t boil your Touch X, keep it away from the ocean or anything save for tap water as chemicals and impurities can wreck its silicone skin.

Boiling, by the way, doesn’t mean your typically-temperatured bubble-bath, so cavort there to your heart’s content as the Touch X is wonderfully, playfully waterproof. 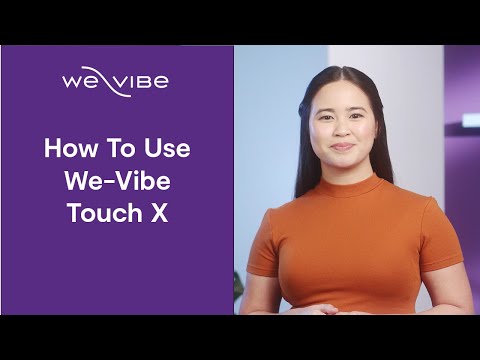 It might sound shocking, but the reality is that sex isn’t just about what you or your partner happens to have below the waistline.

And, thankfully, We-Vibe is aware of this, so they’re marketing the Touch X as a product that can be used practically anywhere on the body, including, if so needed, to sexually stimulate whatever you have between your thighs.

But should you buy one? Putting it bluntly: yes, with my typical hemming and hawing that only if you don’t expect it to be the best massaging or vibrating toy on the market, and instead appreciate it as a high-quality sextoy that’s a remarkably sensual one as well.

And because purchasing a Touch X will help support We-Vibe and especially how with products like this one, they’re reminding us that pleasurable stimulation can come from all over the body, and in all kinds of amazing ways.