When it comes to sextoys, bigger isn’t always better. In fact, the need for products that can deliver a sexually stimulating oooph while small enough to fit into a purse or tote has fueled an entire line of devices.

And one of the newest of these bullet-style vibrators has just been released by We-Vibe: a name to be reckoned with when it comes to producing superior-quality yet affordable devices.

But does the Tango X measure up in the size-yet-still-powerful department or should it be delegated to the could-be-better bin of sextech products?

Better than a bullet 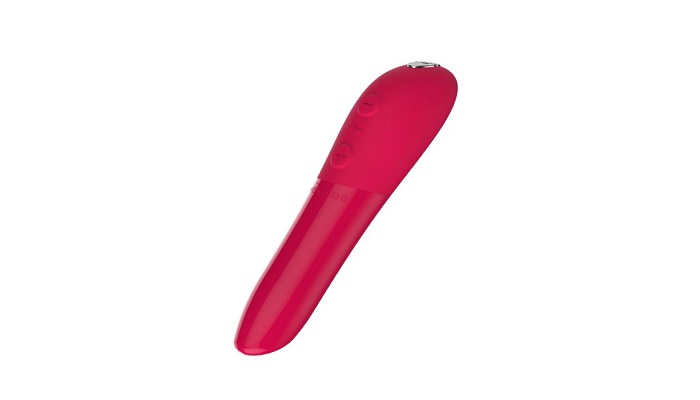 This is in its favor as being bigger has allowed We-Vibe to pack it with some features those other toys simply don’t have the room for.

Beginning with what a lot of those more minuscule vibrators lack, i.e., a well-engineered and high-powered motor that can produce more than enough vibrational goodness to whatever body-part you should ever want to apply it to.

So if you’re equipped with a vulva, it’s just about ideal to stimulate anywhere there, including the labia, the entrance to the vagina—but please don’t insert it entirely as it isn’t designed for that kind of play—and, of course, the clitoris.

That’s not the only place it can be used, as there’s no reason why it can’t be employed to sexually stimulate nipples, the area around the anus—and, again, don’t put in—and be a fun toy for those without vulvas, as it can be a grand-old-time to for everything from the head of a penis to the testicles.

Great stuff in a tiny package

But you aren’t, which makes the Tango X so impressive. I mean, seriously, show me a full-size toy that has all it offers and won’t cost an arm and/or a leg.

For instance, it’s chargeable as opposed to needing a deskside table drawer stuffed full of AA batteries to have a good time with it. Not only that but on a full charge, the Tango X will put a smile on you or your partner’s face for two hours—something that, once more time, is an unpleasant reality with other sextoys.

Then there’s what it can do in those two hours, as the Tango X has seven distinct vibrating modes and eight individual power levels—while so quiet, no one, least of all your neighbors, will know what you’re doing with it.

And among those vibe patterns are the playfully-described Pulse, Wave, Tease, Tempo, and the more whimsical, Cha-Cha and Heartbeat.

The best bullet vibe … ever? 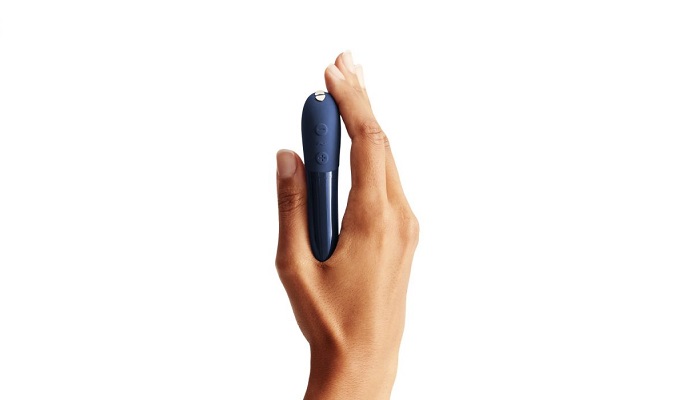 And the Tango X’s good stuff keeps right on coming. Want to mix your sexy-time play with a good soak in your tub or while steaming jets of water pelts your body? Then feel free to take the Tango X in there with you, where its IPX7-rated silicone skin will do its sexually-stimulating thing as you get nice and wet—and not exclusively from the hot water you’re splashing all over yourself.

It may not sound like a lot, but it’s still cool that We-Vibe understands that some of us are getting tired of our sextoys coming in nothing but pink; the Tango X comes in two colors—and neither of them are in that disturbingly-fleshy tone. So take your pick: a luscious cherry red or a too-cool-for-school midnight blue​.

As it’s designed to be taken whenever you go, We-Vibe also equipped it with one of those features I wish every sextoy had: a special travel-lock to prevent it from unexpectedly coming alive in your luggage.

The Tango X’s dimensions and other vital facts

So you can see that the Tango X qualifies as a bullet vibe, despite there being teenier versions out there.

Returning to what it’s made of, the Tango X’s body is constructed out of phthalates, BPA, and latex-free body-safe silicone. Its battery is lithium-ion, and the toy is charged through by magnetically attaching its power cord to the toy itself.

And in case you’re wondering if this is the point where I get back on my hobby-horse about how these charging systems can suck—what with their equal parts tricky to attach and frustrating in that they can get too easily disconnected—then rest easy as I will not indulge in this. Or at least not any more than what I mentioned above.

Mainly because with the Tango X, and a testament to how well We-Vibe made it, those kinds of problems aren’t worth worrying about. However, it’s still a good idea to place it where it won’t get accidentally bump while charging. 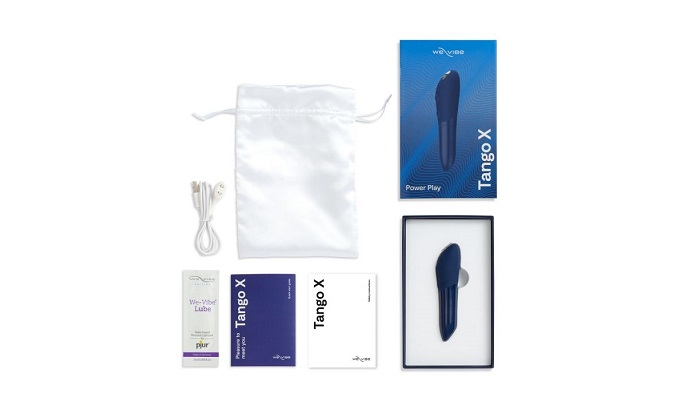 After charging the toy thoroughly, which will take about an hour and a half, you can get right to the fun.

Controlled by the Tango X’s three buttons, in a configuration that shouldn’t be all that unfamiliar with anyone who’s used toys from We-Vibe before—or those from their competition as it’s coming somewhat close to becoming something akin to an industry standard.

At the top is the double-duty button to switch the Tango X on and increase the toy’s vibration. Below it is a symbol that, when pushed, cycles through the product’s pre-set vibrational patterns, with below that the kissing-kin to the first button though this time it decreases the intensity of the vibes and switches the toy off.

Pressing the top and buttons together, meanwhile, puts the Tango X into its travel-safe mode I mentioned. Set between the twin metal charging contacts is the toy’s LED indicator light that shows when the Tango X is fully juiced up, needs a refill, or if charging is taking place.

Along with its phthalates, BPA, and latex-free body-safe silicone outer skin that makes it comfortable to use and safe to enjoy in your tub or shower, the Tango X is also easy to clean when you’ve finished having fun with it.

All it takes is either a teeny dap of mild dish soap and warm water or stuff specially formulated for silicone-constructed sex toys, and you’re all done—after trying it with a lint-free cloth, of course.

On cleaning, and on why you should never use the Tango X or any other silicone sextoy in the ocean or any tub aside from the one you have in your bathroom, though excellent for sexplay and all-but-guaranteed to not give you any kind of unpleasant body-reaction, silicone isn’t invulnerable—and anything save for clear water with some gentle bath soap can cause the material to corrode.

What you get with a Tango X 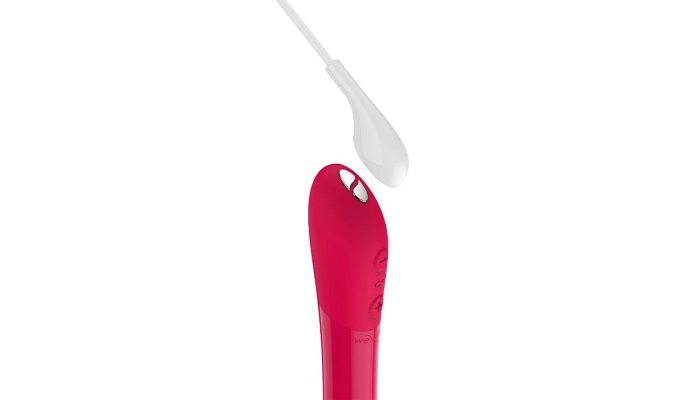 Starting with the charging cable—though no power brick. This is hardly a surprise as there are very, very, very few toys out there that come with one.

Then there’s the toy’s multi-lingual manual, which’s also available on the We-Vibe site; a quick-start guide, a handsome storage bag for the toy, and a two-milliliter sample of lube courtesy of pjur.

Finally, the Tango X comes with a warranty, but it’s not your average just-a-year one but instead a wonderfully generous double that. Though considering how well made We-Vibe products are, you’ll probably never have to use it. 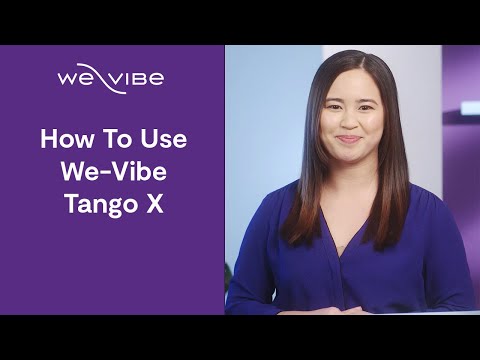 For once being direct in my end-of-review recommendation if a Tango X is worth buying, I have no qualms saying that—for sure you—should.

What, you want more? Okay (sigh): it’s a well-made product from a top manufacturer who’s somehow managed to cram a full-size toy’s worth of features into a petite shape while, more impressively, making something that also feels like its gigantic brethren.

Besides, it’ll go the distance with a superb two hours of vibrating enjoyment on a scant 90-minute charge, comes with a lube sample, and a two-year warranty.

And did I mention that you have the choice of two colors, neither of which are pink? Seriously, who could want more than all this?

Due to this, some people have taken to using a small handcloth or similar to help maintain a grip on these intense little suckers. Though there’s also a good chance that you won’t have any problem, so no need to worry until—as the old saying goes—you need to.