So, when I heard of how the Amorino stimulates the entire clitoral area to give powerful orgasms, I knew I just had to have it

And as you can see from this Fun Factory Amorino review, the experience was worth the effort, time and money. 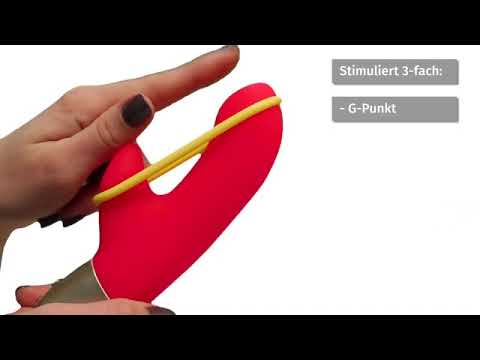 What is the Fun Factory Amorino?

The vibe has a unique detachable yellow stimulation rubber band, thoughtfully wrapped around its two ends.

The strap helps to transmit the vibrations from the sex toy to the vulva and other areas around the clit. 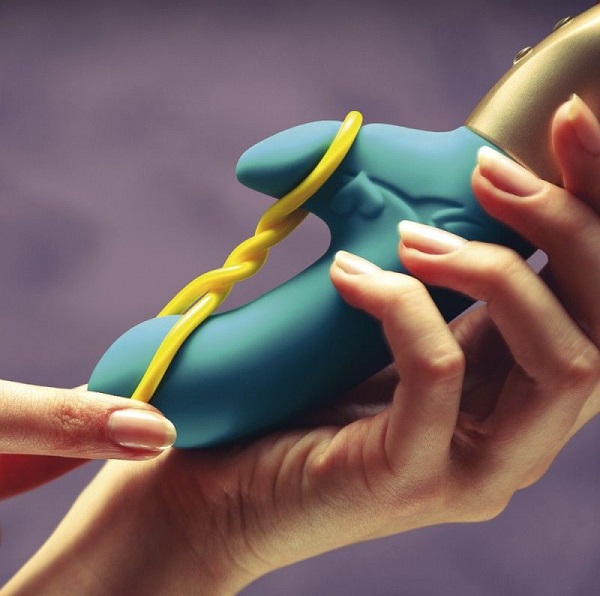 Features of the Amorino

Whoever said ‘Good things come in small packages’ might have had the Amorino in mind.

The Amorino is 7 inches tall and boasts of a 4-inches girth. This dual stimulator, therefore, can satisfactorily excite both the clitoris and the G-spot.

The strap is without a doubt a game changer.

Instead of just stimulating one spot, e.g., the G-spot or the P-spot, the pleasure band helps to direct stimulating vibrations all over the labia.

The Amorino comprises 100% medical grade silicone. It is also non-porous and phthalate-free. As a result, it is completely body safe.

The silicone covering also makes the toy super soft and lovely, or as Fun Factory puts it, “Velvety Smooth.”

The six vibration intensities and six pattern modes of the Amorino offer some intense clit vibrations guaranteed to send anyone over the edge.

It gives you plenty of settings from which to choose, ranging from low to extremely powerful waves.

For instance, you could use it in the shower, bathtub, pool and even while you are swimming at the beach.

With the Amorino, you don’t have to worry about running out of batteries. The device is rechargeable using a magnetic charger that utilizes a Click and Charge Technology.

When the charging nears its end, the buttons will stop blinking one at a time.

Easy to use control buttons

For that reason, you need a toy that has user-friendly controls. The Fun Factory Amorino has three control buttons that are relatively easy to use. 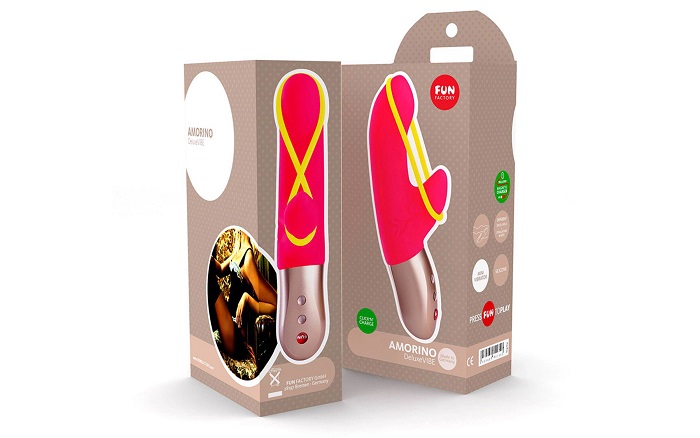 How does the Amorino work?

Without the yellow pleasure band, the Amorino would be any other clit vibe. However, thanks to the strap, this beautiful baby offers some satisfying stimulations.

As you insert it into the vagina, the band begins to transmit vibrations all over the vaginal lips, venous mounds, as well as external erogenous areas.

You can use the two control buttons to adjust the intensity and patterns of the vibrations.

As you play around with the settings, you will ultimately come to the settings that bring you to an earthshaking climax.

What is in the box?

The rubber band too is elastic and extends from one end of the vibe to the other.

Depending on the amount of sexual stimulation you desire, you can choose to either use the rubber band the way it is or twist it.

Naturally for you to use the Amorino, you must charge it for about eight hours. Once fully loaded, your “playmate” will last incredibly long.

After applying lube, it is time to play.

The device sits pretty comfortably in one hand, and the controls are somewhat user-friendly. I only had to hold down the Fun button for the sex toy to spring to life.

You then need to insert the device. As it brushes along your vagina entrance, the Amorino sends pulsating vibrations throughout the rubber band.

That action creates terrific clitoral stimulation guaranteed to get you off.

The control buttons on this bad boy are not just for aesthetics.

They offer many vibration patterns and intensity combinations. As you play around with the settings, the vibrations will become more intense forcing you into dream-like orgasms.

Pros of the Fun Factory Amorino

Cons of the Amorino

Thanks to its many useful features and out of the box pleasure band innovation, I would recommend this sex toy in this Fun Factory Amorino review.